For the past 1 week, my system was acting funny. Whenever the Sherline spindle is on, my steppers would step by itself. Changing to different spindles (Proxxon/Dremel/Router) doesn't replicate the problem. I presume something is wrong with the Sherline or my electronics somehow became more sensitive to noise.

After several trial to fix the electronics (rearranging the wires, putting a noise filter) and the spindle (checking for worn-out brushes), I gave up. Details here at Yahoo group

After digging further and several internet searches later, I decided to make myself a low-pass filter to be fitted at the input (step/dir/enable) of my stepper driver - PICStep. This site triggered me to do it and I used the values given there (1k0 resistor, 1n0 capacitor, ~150kHz cutoff). It worked like a charm from the first power up. Not a single step on the steppers either when the spindle is running or start/stop switching. Everything back to normal now... Photo of the contraception with schematic shown below. 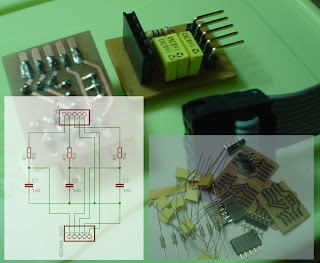