After more than 20 years relying on Ferric Chloride as my etchant for PCB, I decided to switch to a new solution for PCB etching that promises faster etching, cleaner solution and recycle-able chemicals. After review of several sites on the internet, I decided to go with the Hydrogen Peroxide/Hydrochloric Acid solution. 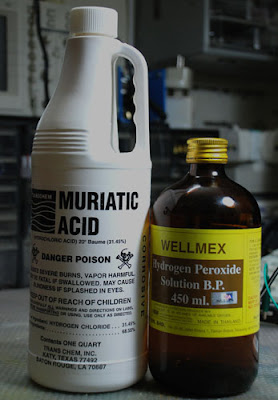 For the volume of solution that I required and based on the concentration of chemical available, my etchant is made by adding 600ml of the muratic acid to 900ml of hydrogen peroxide yielding 1.5 liters of etchant. 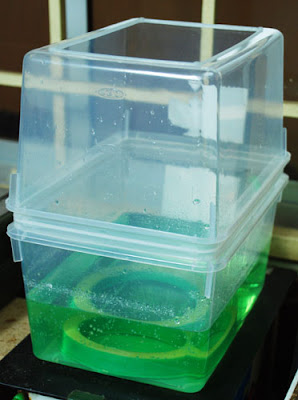 As usual, I added the bubble ring for solution agitation during etching. However, with the new solution, the air bubble also serves as oxidizer, regenerating the solution. Theoretically, I should not need to throw away the solution for eternity. If the air bubbling isn't enough to regenerate the solution, addition of small amount of new muratic acid should be able to replenish the consumed ions...

Better explanation of the chemistry involved at this site. Excerpts below:

Before there's much copper dissolved in the solution, Cu + 2 HCl + H2O2 -> CuCl2+ 2H2O is the dominant net reaction. That is, the extra oxygen in solution from the peroxide is oxidizing the copper metal, in presence of the acid, to make copper (II) chloride. That's our starter etchant. The resulting CuCl2 shoud be a nice emerald green color.

After you've dissolved a lot of copper into the solution, and used up all the peroxide, the copper chloride does most of the etching for you: CuCl2 + Cu -> 2 CuCl. That's the end etchant.

Eventually you etch so much that you convert all the CuCl2 into CuCl, which doesn't dissolve copper (and is a yucky brown color). As long as you've got enough acid in the solution, you can simply add more oxygen to re-oxidize the copper(I), making more copper(II) chloride and water: 2 CuCl + 2 HCl + O -> 2 CuCl2 + H2O. And then you can etch again.

CuCl2: After all the peroxide is used up, and the solution starts turning brownish, you'll have to add oxygen to regenerate the solution again: toss in a few more capfuls of peroxide or bubble air through the solution or swirl it around vigorously, or just pour it into an open container and wait. It's easy to tell when you're ready to etch again, because the solution turns green.

It's also impossible to add too much oxygen by adding air, so bubble/swirl to your heart's content. If you're using peroxide to add oxygen, be sparing -- a little goes a long way, and it's mostly water so you're diluting your etchant by adding it.

Acid: Note that HCl is being consumed in the starter etchant and the regeneration reactions. So we're going to have to add a bit more acid as time goes by. If you notice that it's harder to re-green your brown etchant, it's probably time to start thinking acid.

Simple jer.
1. Pour 1 bottle (450ml) of H2O2 into PLASTIC container.
2. Add 300ml of muratic acid.
3. Mix thoroughly and let it settle. Do not close the container as the reaction will produce some gas.
4. You're ready to etch!
5. After SEVERAL etchings, the solution will become dark green and later brownish.
6. That's when you need to add oxygen. You do that either by air bubble (aquarium air pump) or by adding some H2O2.
7. When it become hard to re-green the solution, add some more muratic acid.

Since I use the air bubbler DURING etching, I need not do step 6. I only do step 7 as needed.

Have you tried etching? how much faster is it? Is solution after mixing still hazardous, caustic? This time your etch tank is bigger than my UV box...hi..hi...;-)

Yes, etch oredi but with fresh solution lah. That's why the solution is green. Solution was clear when first mixed. It took only 2 minutes without bubbling... yeaaa...

The etch tank is the same size as my old container but taller to prevent splashing...

Hazardous? No idea, but I read somewhere that after mixing the acid is around 3 molar... No acid burns so far... :-)

Last for eternity? Also no idea. Not much PCB making lately so cannot really test the solution longevity. Will update on how well it stores later.

Assalamualaikum Bro ,Selamat Berpuasa, Hehehehehe ,thanks for the info's guru and one more kat maner boleh dapatkan that kind of chemical's used, kat hardware shop here none of them sell it, how much is it and ur phone no bro, Thanks

I finally found what I was looking for whenwe we looking for the Hydrogen Peroxide.... they tried to sell me 1kg.. I said I dont need that much.. just about 20-30gm aje... :)

Last my patient death cause by hydrogen Peroxide... exposure more than 20ppm also can coz cancer in short term.

Jurukaka,
Care to explain the health hazard of hydrogen peroxide?
My search so far show that it is safe (even as mouthwash) at low concentration (which is much higher than 20ppm).
Here a link I found that links to many other.
http://answers.yahoo.com/question/index?qid=20070613185108AAOiDpQ