I recently started using wireless broadband for my mobile internet access. While I was able to get around 1mbps at my office location, the coverage doesn't extend well to my housing area. I have to be contented with EDGE. EDGE would still be okay for my occasional internet need at home but the signal strength is so bad that I could barely make any connection.

So, again, I'm off to the internet for a solution. A full parabolic dish would probably be an overkill for my need so I settled with parabolic reflector instead. After about 20 minutes on the PC for the parabolic design and g-code generation; and another 20 minutes on the Sherline CNC, my simple parabolic reflector was born. Made from acrylic (left over from other projects, thus the multiple colors), the reflective portion is covered with the kitchen grade aluminum foil. 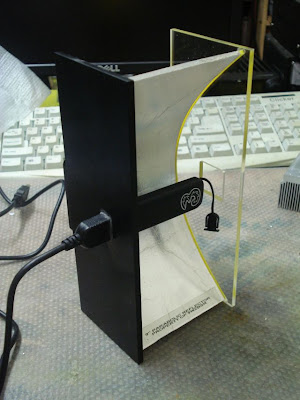 As shown above, the reflector can be set vertically on the table or attached to a normal handphone holder bracket for more articulated positioning (below). 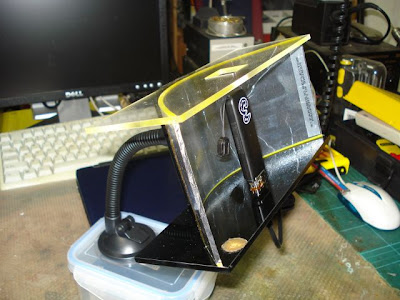 How did it perform?
I have no way of measuring true dB improvement but the signal meter on the software provided went up by 2-3 bars when the reflector is used. For now, I could utilise EDGE almost full speed (around 200kbps) without fail. Happy at last... :-)

hi bro, thnx for letting me test the device, in an area where i usually get only 1 bar HSDPA unconsistently, i now can get 3 to 4 bar HSDPA consistently. In another area in KL near Maybank tower, where its a known no 3G coverage, only edge, i now get 5 bar on HSDPA consistently. great stuff, but i do get weird looks from my colleagues. cheers.

Do you have details on the critical measurements for making this device? Thanks.

I used this software to calculate...
http://mscir.tripod.com/parabola/

There are plenty more on the web... just google 'parabolic refelctor calculator'

hello.. We want to ask that how to make the reflector.. did the aluminium foil need to wrap with other things..??

You need something stiff to maintain the parabolic shape... cardboard can be used... just stick the aluminum foil to the cardboard...

Cant u detail explain how to connect it to computer.. Seriously I do it half way and stuck with it..

Put the 3G dongle at the focal point of the parabola... use usn extension cable to connect to your pc

Thank you for this useful post. I live out in the country and in my cottage i could only receive a g signal or a 3g for maybe 5 minutes at a time. I bought a cheap curved glass photo frame and covered it in tin foil with around 4 inches between the back of the frame and the modem. so far it hasn't dropped since connecting 2 hours ago.

I think a dish type parabola pointed at the cell tower would be stronger but this is good enough :)